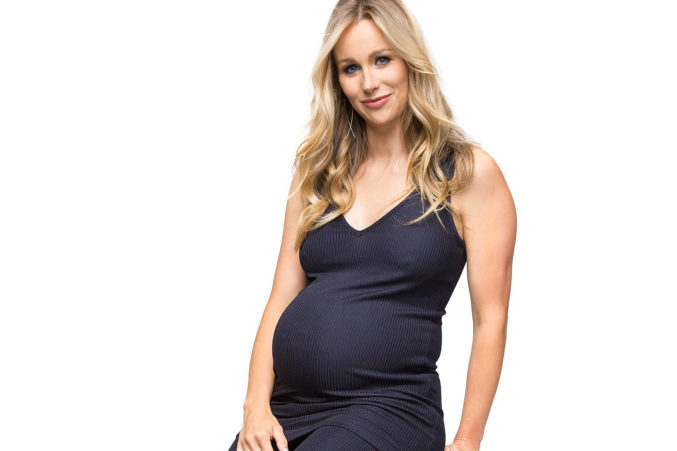 Your third child is due early this month, and your first two boys are named Hawkins and Rivers. So what are we looking at for No. 3? We have a sex or a name yet?
It’s a boy. Our kids’ names are kind of surnames because they end in “s.” So I kind of want to keep that theme up, where there’s an “s” at the end. As of now, we don’t have a name picked out.

I have a suggestion. Your line of sprays, Hawk + Sloane, it’s a combo of your firstborn’s name and that of your business partner, Hollie Siglin. Her third kid, his name is Crews. You need a name for your third kid that will pair well with Crews for a future product line.
For a future boys’ clothing line. You’re right!

OK, you ready? Are you sitting down?
Oh, yes.

Here’s the name: Boos. All right. See there? You’ve got to spell it right. Boos Romo. Boos + Crews.
We’ll come up with a liquor line for moms. Moms drink alcohol. You don’t get drunk in car pool. You just spray a few shots of vodka in your mouth, and you’re good to go for the rest of the evening.

You’ve got six sprays, like one with lavender to help kids go to sleep. The one I’m most interested in is Sassy Spray. You call it an “oral disciplinary spray.” How bonkers was Hawkins that you had to invent this stuff?
We call it the modern version of soap in the mouth because no one wants to put chemicals in their kids’ mouths, obviously, but you’re raising little kids, and they tend to either be sassy or they can bite, or they yell or they talk back or they lie. Hollie was like, “Have you tried apple cider vinegar in the mouth?” I was like, “That just sounds like a disaster, tackling my 4-year-old and feeding him vinegar.” It led to putting it into a travel spray bottle, and that worked so much better. We added to our formula a blend of green vegetables, so you don’t feel as guilty when you have to discipline your child because you’re giving them a bunch of nutrients as well.

I asked our dining critic to taste it, and she actually liked it. I wonder if you’ve run into any kids who are now super sassy because they like the spray and it reinforces their bad behavior.
[laughing] We haven’t had that problem yet.

How many shops is Hawk + Sloane in now?
We just expanded into a lot of stores in Texas and in Oklahoma, and Arkansas, Missouri, Kansas. We just did the Dallas gift market in June. We’re now in about 30 retail stores across all of those states, in the Southwest region. In Dallas, we’ve got Baby Bliss, Paper Affair, Sample House, to name a few.

You were a TV broadcaster before you married some guy named Tony Romo. Have you given him any tips on his new career?
You know what’s funny? He doesn’t really need much of my tips, but I did tell him when I watched some of his practice runs to look at the camera more. When you’re dealing with a co-host, you’re talking to each other. But he was looking at the co-host a little bit too much and talking just to the co-host. I was like, “I need you to talk to me, the viewer.”

Now that he’s retired from football, what’s it like to have him around the house more often?
It feels like a normal off-season, minus the mini camps and things. I think the biggest change will be this fall and him being gone a lot more. It hasn’t felt real different up until now at all. He’s still working out, and he still leaves the house to do workouts and practice for CBS, so it doesn’t feel that different. The fall is going to be our big adjustment.

Oh, my goodness, and by then you’ll have the brand-new baby, too. Little Boos will be needing diaper changes.
That’s right. Little Boos. He will be here. I’ll be a little short-handed, but with grandmas and sitters, I think we’ll be OK.